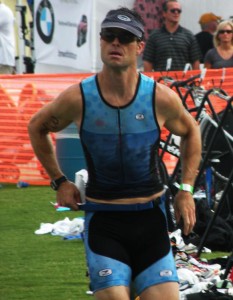 I just have to share an extremely gratifying testimonial from triathlete Todd Wilkins. Todd was a broken athlete when he contacted us. You can read in his own words below the trials and tribulations he endured dealing with severe iliotibial band syndrome. He was a dispirited athlete, and had just about given up hope on racing again. He did not expect to be able to return to long-course triathlon, that's for sure.

Todd lives afar from our lab, so we began with our work together with the virtual on-line gait analysis. The more athletes we work with through the online analysis process, the more we know how incredibly effective the system is. We were able to pinpoint Todd's problems in movement quality leading to compensations, dysfunction, and, ultimately, to his unending cycle of injury. We got him on a regime of prescriptive exercises, and created a training plan for him. He put his head down, believed in the process, and did the work to rebuild his body as a strong, stable, mobile, and durable athlete.

Recently, Todd went a 4:48 in a half Ironman--the first race of that distance he has been able to do in 2.5 years! He was fifth OVERALL, and took first place in the masters category. It is a super, super result. Not only are we over the moon at Todd's finishing time, but Kurt and I are extremely gratified that Todd is uninjured and pain free! Think about that! He rocked the house with a super solid result, and got on the podium. Thing is, now that he's a stronger, more stable and durable athlete, he can begin to REALLY TRAIN and unleash his true potential. There are many great races and results ahead of him, no doubt in our minds!

Thanks for the kind words, Todd. Kurt and I are both so happy for you!

I just needed to send a long overdue note to thank you for getting me back to running and racing triathlons. You will remember I had severe ITBS (iliotibial band syndrome). For the last two years, I had gone through self treatment with rest, stretching and yoga. Then I went to see a sports medicine specialist getting MRI's, injections and physical therapy. When that didn't work, I went to see a different sports medicine specialist and got more of the same. Finally I was told I would either have to stop running or consider surgery.

You know surgery for ITBS has pretty poor results. I am a physician myself, and am pretty comfortable with most standard medical therapies, but was not going to have surgery. I had pretty much given up hope of running more than a couple of miles ever again.

Then I saw you for a gait analysis.

The program is fantastic! I have run several triathlons this summer that include both Olympic distance and sprints. I just completed my first half iron distance race after two-and-a-half years of being out of racing. It went great thanks to your gait analysis, the Return to Running program, and Coach Al's awesome coaching this summer. I was able to post the second fastest bike split in the half iron distance race, and still run a decent 1:37:xx half marathon on a hilly course. I could not be happier.

I think I see an Ironman in my future now, something I had given up on not too long ago.

PS--You too can find and unlock your potential. 20% off all gait analysis packages AND 30 days FREE on our triathlon team. Click here to learn more.