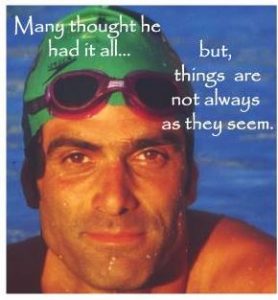 I’m honored to have two special guests on the podcast today: Jean Mellano, author of the memoir Slipped Away, and veteran, founding member, and executive director of the Airborne TriTeam, Ron Hurtado.

Some background: I first met Steve Tarpinian in 1996 after deciding to attend his “Swim Power” clinic at the Nassau County Aquatic Center in Long Island, NY.

I was hoping to learn how to overcome my fear of the water and how to swim. If you’re thinking that’s not exactly an easy task for a 36-year-old having experienced a near drowning as a 10-year-old kid, you’d be right.

I arrived as a anxious newbie, wondering what the day would bring. When I left at the end of the day, I had made a friend for life and also come to know one of the best teachers, coaches and men I’ll ever know.

Sadly, on March 15, 2015, that great teacher, coach, mentor…lost his war on depression, and took his own life. 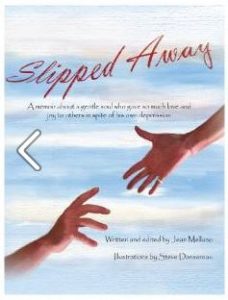 Fast forward a short time later, Steve’s soulmate and partner of 35 years, Jean Mellano, after reading all of the heartfelt remembrences of Steve on the popular Slowtwitch.com forum, decided to write a memoir to honor Steve’s legacy and bring more awareness to mental illness, specifically depression. She titled it Slipped Away.

In Jean’s words,“there is still so much stigma and embarassment attached to depression, which further adds to the suffering of those afflicted. Mental illness is where Tuberculosis, HIV/AIDs, and cancer were many years ago in terms of no one wanting to talk about it.”

In today’s podcast, Ron, Jean and I discuss many things including Steve’s legacy, such as: 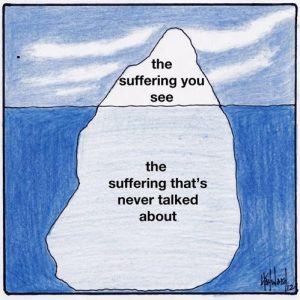 In Jean’s words: “To many people who knew him, Steve had it all and appeared to be on top of the world. Hindsight is 20/20; we now know things weren’t always as they seemed. In many instances, people who suffer from depression and mental illness hide it very well. If someone close to you has a pattern of “going dark” (not returning phone calls or emails, etc.), it could be more than just them being busy or forgetful. When this happens too often, perhaps a little more compassion and understanding for that person may be in order.”

Jean believes Steve’s true legacy and how he should be remembered isn’t as a great coach, race-director or athlete who took his own life, but rather, as a human being who did his very best to make people feel good about themselves and who inspired them to accomplish things they never thought they could do. I couldn’t agree more.

Thank you Jean and Ron, and everyone who joined to listen in to this podcast.

To learn even more about the memoir and about Steve, or to purchase a copy, visit the website HERE. It’s also available on Amazon. You might also want to visit the Slipped Away Facebook page HERE.

PS: Jean wrote a wonderful article for the online magazine, The Mighty. In it she shares some of what she has learned about grief since Steve’s passing. I highly recommend it.