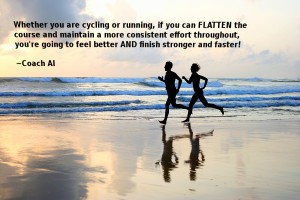 In today’s podcast, we once again respond to some listener questions. We really appreciate it when you contact us and ask great questions – keep them coming!

Going down: The topic of downhill running, both from a technique perspective and also from a pacing perspective, is often glossed over in favor of the opposite, which is running up. A listener sent in a link to an article titled “Efficient Running Up and Downhill in Triathlon,” (triathlon.competitor.com and the Journal of Science and Medicine in Sport), which discussed some research conducted at the University of Connecticut on competitors at this past October’s Ironman World Championship. Specifically, the researchers looked at how “various types of pacing can effect overall performance.”

The author states, “researchers took a random sampling of Hawaii-qualifying athletes and measured their predicted personal pre-race goal time against their finishing time on race day. Using Timex Ironman Global Trainers and TrainingPeaks software, they analyzed nine segments of the bike course and 11 segments of the run course. Their goal was to determine whether any of the segments predicted performance, and they were surprised at the resultsâ€”the downhill portions (on both the bike and run) proved to be most influential on overall time. They found that athletes who maintained faster relative speeds on the downhill sections of the course, and who had smaller changes in heart rate between consecutive up and downhills, were more successful relative to their goal times.”

How you pace your downhills and uphills in a race is critical, and the research, both anecdoatal and scientific, and practical experience, support this. In today’s ‘cast, we’ve got lots more to share on this topic! Its a good one.

Also, a listener wrote in with some questions regarding his nutrition planning as he prepares for the Alcatraz Triathlon next weekend. We believe his questions are common and important, so you’ll want to listen in to hear what they are and our responses.

Please tune in and join us for today’s talk, where we discuss these topics and a few more as well.

Have a great Memorial Day weekend everyone! Thank you to ALL of the men and women in uniform who, through their selfless service, make enjoying our sports possible.