You can achieve this same success!

This kind of success can be yours! Make the choice to feel and run better and faster!

There isn’t a ‘quick fix’ or magic pixie dust that can bring about THIS kind of amazing results.

But THERE IS A WAY.

You simply need to make the decision that it, and YOU, are worth it.

A real example of what can be achieved with this process. 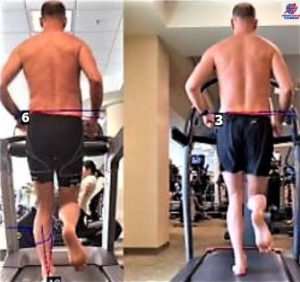 A dramatic comparison: Before and After!

When I met Dave, he had been dealing with chronic hip, foot, and leg pain. AND he had an injured back – a disc herniation that was easy to see on MRI.  To say he was frustrated and had almost given up on ever being pain-free again, was an understatement.

Take a look at these before and after images. I grabbed the image on the left from some video of his initial Virtual Gait Analysis. The image on the right was taken three short months later.  He went from being a frustrated and injured triathlete to one that was much healthier and happier, and finally ready to move forward and get on with his season!

At the time of his followup video, he’d obviously made incredible progress. But make no mistake, there was still more work to do. This kind of process is always a journey and moving-target. Going from injured to durable to “do anything you want to do” takes time and commitment.

Within the image, what should you pay attention to?

The larger the number, the less stable the runner is, and the higher the risk of injury.  6 degrees, which you see in the “before” image on the left, is a relatively “high” number, indicating a significant instability when he lands and loads his left side. In the right “after” photo, you can see that number is significantly improved at only 3 degrees! I tell every runner I work with that the “ideal” and goal we’re striving for is 0 or 1 degrees.  So, he is on his way!

There are many running myths that predominate in the fields of physical therapy, gait analysis, and run coaching. One of the biggest… is that improvements as seen here can be achieved by focusing on the hip (only), or the core (only), or…on conscious, outside-in, form or technique “changes.”

ALL of these are MYTHS.

To put it another way, these kinds of improvements won’t happen to this degree because of the action of ONE part of the body, or ONE muscle.  They happen because ALL of it – each area and part, is doing its job – what it was designed to do: his hips, his core, his feet, and his legs.

In simplest terms, much like a typical “union shop,” every person (or in this case, body-part) has a responsibility and needs to do ITS job. The training I embarked on with Dave was the same as with every athlete I work with – ALL of the boxes need to be checked and everything needs to be working the way it’s designed to. THAT is the approach that can lead to this type of success! 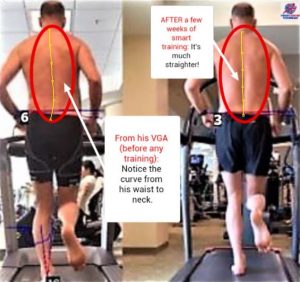 Look at his spine comparatively. It’s much ‘straighter’ in the image on the right.

Notice how in the “before” image on the left, how his trunk is leaning and curved to the left.

These are all objective indications that his CORE is simply doing its job – taking care of itself.

The smaller muscles and connective tissue that support the spine and are responsible for improved integration, alignment and balance throughout his entire trunk, are all working much better. 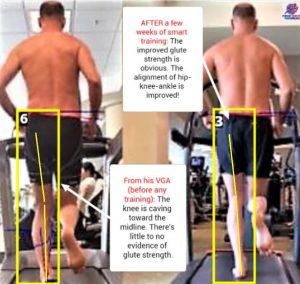 Look at the overall alignment of the trunk and especially his left leg. There is much better musculoskeletal stacking and alignment in the image on the right.

Look at the overall shape of his entire hip girdle on the right. Impressive.

He’s done incredible work to get to this point – and deserves the credit!

When I shared these before-after images on Facebook for all to see, Dave was so gracious in offering his perspective on the process we’ve gone through together. I highlighted it in yellow below. 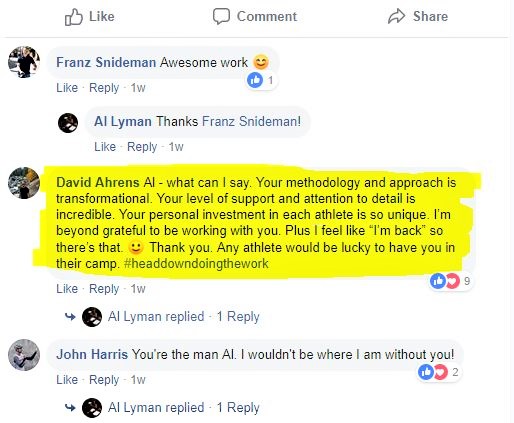 What about running FASTER? Do these improvements contribute to faster running potential?

The answer is a resounding YES. And here’s why: ENERGY LEAK. 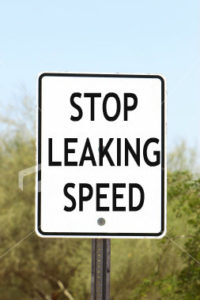 Every added degree of  “lateral pelvic drop” of the hips and trunk – as each foot makes contact with the ground – results in energy being lost – being dissipated.

Picture a radio tower.* It has guy wires around it on 3 sides for support.* If you remove the guy wires from one side, eventually the structure will collapse.* The joints in the body are no different.* They must be supported by the muscles.* Weakness or poor muscle activation puts excessive loads on bones, joints, ligaments and connective tissues that not ONLY lead to injury – it leads to lost speed potential.

To understand this even better, think of an analogy of a bouncy ball.

If I take that ball and throw it to the ground – the harder I throw it, the faster that ball comes back at me, and the higher into the air it would go.

But what if the ball had less air in it so that it “flattened” more as it made contact with the ground?

Your body is, in many respects, the same way.  It’s analogous to your hip dropping to one side, as though your pelvis and hips were “flattening.”

Check out this video from youtube of a scientist demonstrating this with a tennis ball.  As the ball makes impact, it’s collapsing and squishing – and in the process, energy is lost. Any tennis player who’s played with worn out balls understands this very clearly! 🙂

Of course, in addition to improved efficiency because of less energy leakage, we know that running speed also comes from…

…how much force the runner can apply to the ground. 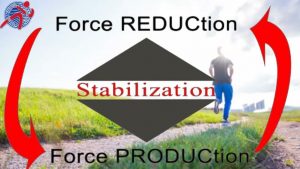 A little known fact that is true for most runners: as little as a 1/4 inch improvement in stride length achieved from improved stability – results in a ~10-seconds per-mile improvement in speed!

Any runner who has trained hard and attempted to get faster – KNOWS how difficult it can be to improve by 10-seconds per mile.  Especially as you get closer to your true potential!

So, what did we do together to help him reach this point?

It all started with my Virtual Gait Analysis!

So, let me ask you point-blank: Are you interested in this kind of information, and this type of success?

If you’re serious about improving, feeling better than ever, and exploding your potential, here’s what you need.
There are three essential components that must be in place to realize this kind of success.

When these three components are in place, you can DO THE WORK with confidence. You’re empowered. You believe in yourself again.. You’re willing to do the work because you know that you can be successful.

If any of the three above are missing, your chances for success are severely limited. It sucks, but that’s the harsh reality.

Dave’s experience with our Virtual Gait Analysis and subsequent training ISN’T the only example of incredible before – after success!

These are REAL, objective, and exciting RESULTS for these runners!

Are you ready to get started on YOUR amazing journey to be your best self? If so, get in touch. I’d love to play a role in your success. I’m in my 40th year of learning, studying, and applying what I learn when it comes to avoiding and coming back from running injury. I can help you get to where you want to go.