Here’s one cool way to build hip and leg strength.

This past week on Instagram I posted a short video of an athlete I coach doing an Oscillating Rear Foot Elevated Split Squat.

In that post (my handle is pursuitathlete), I mentioned I'd be writing about why I came up with this variation as part of a progressive 3-block approach I use with the athletes I work with, for building leg and hip strength. 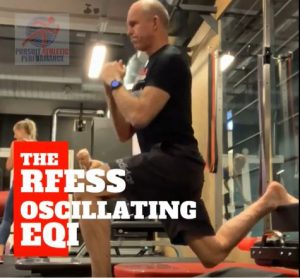 Check the video out by clicking on the image up to the left. The athlete's name is Arne - he's one of the top 50+ triathletes in his home area of Oslo, Norway.

So what's the deal with this somewhat gimmicky looking variation on the Rear Foot Elevated Split Squat?

I'll start by saying that I believe this variation (one of a few different variations I am employing with my athletes right now) can be highly effective training if done correctly and progressed smartly. I also believe it's potentially very helpful in building the kind of strength that will help you run and ride much faster and more powerfully.

So today, if you're willing to dig into this a little bit with me, let's get into this variation in a bit more detail.

The first thing to recognize is that the "oscillating" movement at the bottom of the squat position is in what is a very challenging (and disadvantaged) position. Why does that matter? Keep reading!

Here's the deal: The intensity of any exercise (including this) is drastically increased if an athlete is required to spend a longer duration of time in a range of motion that is commonly considered to be weaker. I believe this disadvantaged, e.g. lower to the floor position, is weaker in all of us comparatively.

As such, and as has probably become apparent, an "advantageous" position (stronger) would be one much nearer to the top of the squatting movement. Make sense?

One of my most influential teachers, thinkers and researchers is Dr. Stu McGill. This man has done more research on the spine than anyone else on the planet and has also had the unique opportunity to work for years on elite athletes and weekend warriors alike. He’s forgotten more about the human body than most of us will ever know.

One of the things he’s often stated (based on his research predominantly) is that the BIGGEST DIFFERENCE between elite athletes and everyone else, ISN’T their individual strength or flexibility – rather, it’s actually how they RELAX.

Say again? How they relax?

Yes. To put it more succinctly, it is the speed at which their muscles relax in between muscle contractions.

Elite athletes have the ability to relax much faster between contractions. This is one of the reasons why they look smoother, silkier, and generally more relaxed, whereas some of us look stiff and rigid comparatively.

The Paradox of Muscle Force and Speed:

Dr. McGill, in an interview, had this to say about this paradox: “When muscle contracts it creates force, but also stiffness. Force creates faster movement but the corresponding stiffness slows the change of muscle shape and joint velocity. For many, the instruction to relax to obtain top speed seems counterintuitive. But this becomes instantly apparent hitting a golf ball. Try and hit hard using muscle and the ball never goes far. This is because muscle stiffness slows the motion down. The great long ball hitters relax through the swing gaining top speed but rapidly contract at ball contact to create a stiffness that is transferred to the club and ball. This is the “pulse”. Then the musculature instantly relaxes to maintain speed of follow-through.”

It makes total sense that the same “rules” apply to both running and cycling. Which is to say, it isn’t just about the amount of force you can create when your foot hits the ground or when you are pushing on the pedal…

…it’s as much or more about how FAST you can apply that force (call it Rate of Force Production) and how quickly your muscles relax in-between contractions.

It’s worth noting that while we could argue as to the existence of Sherington’s Law in this day and age (a topic you may be familiar with – and one I’ve written about quite a bit – if you need to, google it), this simple idea that when a muscle is contracting (shortening), the muscle opposite it must lengthen to some degree to allow for movement around a joint.

We KNOW that both muscles are contracting – one is doing it concentrically (shortening) and the other is doing it eccentrically (lengthening). And there are likely some elements of isometric action as well (no change in actual length of the muscle).

Let’s use a very simple example to look at what I’m hoping to convey: a basic bicep curl.

During a bicep curl (elbow flexion) it is clear that the bicep is shortening. However, the tricep must also allow lengthening for the elbow to complete flexion. If the tricep does not relax in a rapid enough fashion, whether that be due to a lack of strength or motor pattern, the bicep is not capable of producing the maximal level of force possible.  If we’re talking about a relatively high-velocity setting such as fast running or pedaling very fast, the slower relaxation of the opposing muscle (in this example, the tricep) will cause even greater difficulties as the speed of elbow flexion will be greatly reduced.

Although this is an over-simplified, single-joint example, the same contraction and relaxation rules apply within all movements. It is the ability to control this task of rapid contraction/relaxation in the “push-pull” mentality that separates the elite from everyone else.

When you push down on the pedal on the bike, or when you’re pushing off to propel yourself forward in running, there’s a definite concentric (acceleration) series of muscle actions going on. At the same time, the muscles opposite those producing that force are acting as decelerators. They’re resisting forces acting on your body and also working to control the rate of acceleration or force production.

Here's the bottom line Al: these oscillations as part of this Rear Foot Elevated Split Squat, are simply about teaching the muscles of your hips and legs, as well as the proprioceptors such as the golgi tendon organs, to function more quickly and efficiently. (If you're thinking of this as training a skill, I think you'd be right!).  Strength (and power) production is a skill. 😊

Getting a bit deeper:

Also known as "GTOs," these are the large nerve proprioceptors located in tendons. If you've been on my email list for a while, you've heard me discuss the "small nerve proprioceptors" in our feet when discussing barefoot training. Today we're talking about the large nerve “dudes.” Large simply means “slower,” compared to small nerve (those in our feet – much faster!).

Anyway, GTO’s act as neuromuscular inhibitors and are sensitive to the forces developed within the muscle. If muscle tension increases sharply, which can obviously happen and does happen in cycling and running, the GTO reflex responds. The key here is that this response can and often does lead to an inhibition of muscle action, ultimately decreasing tension to prevent the muscle and/or tendon from incurring damage due to the rapid, high levels of force.

(I know this is getting a bit technical, but this is important stuff to chew on if you're considering adding these to your training mix, so keep reading!)

It's all about the relationship between inhibition, muscle action, and relaxation!

Generally speaking, most GTO’s are set to inhibit a muscle up to 40% below what that structure can actually handle. For example, if a muscle structure is capable of handling 100 lbs of exerted force, the GTO system would reach its activation threshold at 60 lbs of force. This leaves 40 lbs of untapped performance potential.

Through appropriate training of the weaker points within range of motion the activation level of GTO’s can be elevated, as the body adapts and is taught to handle higher loads in specific ranges of motion.

Ultimately, the ability to reduce the activation of GTO’s at high force levels will lead to increased force output from the muscle and improve strength.

Bottom line – these are about teaching our tissues to function more quickly and effectively and efficiently to hopefully allow for greater force production and speed of that force production.

With ALL that being said, let's wrap this with a few practical tips for how to approach these RFESS oscillatory reps…should you attempt to dive in.

For what it's worth, it is also smart to train in an advantaged position every so often. Just sayin!

Phew. That was a LOT of technical stuff to digest, right?  After typing all of that, I think I'll go take a nap! 😊

Seriously, I hope this gives you some idea of the really cool (and valuable) ways in which we can vary some fundamental strength moves like this one, to "teach" our body to relax more quickly and thus generate more force when it matters the most.

To your success,
Al

PS: If you're not following me on Instagram, pursuitathlete is my IG handle. I plan on continuing to share more cool training ideas and concepts in the future.

PSS: If you believe this post has been helpful and you'd be interested in hearing from me on a more regular basis via email, you can CLICK HERE to subscribe. I hope you've considered the time it took you to read this as time well spent. 🙂